If you’re thinking about combining Kanna with weed then this is the blog post you need to read!

Kanna extract is a dietary supplement used to reduce stress and improve mood. At large servings, it is sometimes reported to produce a feeling of euphoria.

As a disclaimer, we do not condone the use of illegal substances. It is important to make sure that you fully understand the legal status of cannabis in your state or country.

This article is for informative purposes only and is aimed at people who live in areas of the world where cannabis and CBD are legal for recreational or medical use.

Kanna is a mood-lifting and stress-reducing extract from the Sceletium tortusum plant, found in Southern Africa. It has been used for centuries by the Khoisan people as a cultural and spiritual remedy.

When Dutch settlers arrived in South Africa, they noted that the Khoisan people would use fermented Kanna plants during social events, and would sometimes seem inebriated after consuming large amounts. 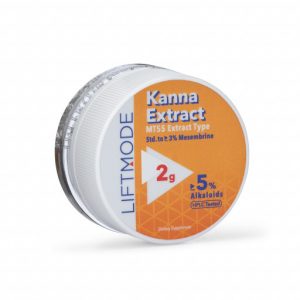 Kanna wasn’t brought to the West until fairly recently, mostly because of the difficulties in growing large amounts of good quality plants. The arid climate and the succulent nature of the plants make producing a standardized extract somewhat difficult.

However, researchers have recently discovered that Kanna works in the brain to boost serotonin levels and as an inhibitor of the PDE4 enzyme. These findings attest to its benefits for improving mood and reducing stress.

Although there is still room for further clinical research, anecdotal reports tend to indicate that the plant extract produces a noticeable improvement in mood and sometimes a light euphoria. It is also used in small quantities to boost cognitive performance.

Why Take Kanna with Weed?

Once people found out about the mood-boosting and stress-reducing benefits of Kanna extract, the question of combining this natural supplement with cannabis was inevitable.

One important factor in combining Kanna with weed is that Kanna also has a history of being used spiritually. In fact, the Khoisan people claimed that it was at least mildly psychoactive – and these reports were confirmed by the writings of Dutch settlers, as well as anecdotal reports from modern times.

Most people who take Kanna with weed are looking to boost their high. Combining weed with dietary supplements or recreational psychoactive compounds is very common.

The combination of weed and Kanna is mostly thought to boost the mood-enhancing effects and to reduce the negative aspects of anxiety that weed sometimes produces.

However, as with all psychoactive substances, the subjective experience can differ dramatically from person to person. But, let’s be honest – if you’re thinking about boosting your high with Kanna, you are probably already quite experienced with weed.

How to Take Kanna with Weed

Kanna can be smoked, chewed, insufflated, or taken orally in a powder form. The method used often depends on the type of Kanna extract available at the time.

If you only have raw plant material, you’ll most likely need to smoke or chew the plant. However, the alkaloid content is typically quite low so you’d need a rather large amount to feel any effects.

Some people have noted some benefits from combining Kanna extract with cannabis in a joint. You might also be using THC edibles, in which case the best option would be to take Kanna and the edible at the same time since they’ll digest at roughly the same speed.

The best way to combine the two is by using a strong Kanna extract orally, around 1 hour to 40 minutes before smoking your bowl or joint.

There are two key reasons for this:

The recommended serving size for Kanna is around 25 – 75 mg. But it’s important to remember that there are different strengths of extracts available.

For example, a 2:1 extract is not very strong so you may need to take a larger serving to feel the effects. However, an extract like MT55, with 5% total alkaloids, is one of the strongest available.

Is it legal to use Kanna with Weed?

Importantly, the state of Louisiana has passed a bill regulating the sale and distribution of Kanna, for human consumption. Kanna may be used as a decorative plant but may not be consumed.

In the rest of the United States, Kanna is not regulated by the FDA and can be purchased as a dietary supplement. That means that all parts of the plant can be legally sold and purchased, throughout the country. If Kanna is sold as a supplement, the manufacturer must meet GMP standards.

However, Kanna may not be sold for medical purposes and is not intended to treat or cure any disease or ailment.

As for cannabis (weed), this also depends on where you live in the world. In the US, at least 10 States have legalized weed for recreational and medical use, while a further 20 states permit it to be used for medical purposes.

Always check the legal status of any substances – including dietary supplements – before purchasing online, especially if you live outside of the US.

Are There Any Side Effects?

Side effects from Kanna are rare when it is used correctly, at the recommended serving size. Clinical studies at large servings tend to only report mild effects like headaches and the loss of appetite.

However, combining Kanna with weed might cause unforeseen side effects. Some reports online mention feeling nauseous and, in some cases, even vomiting, when using large amounts in combination.

If you have a propensity for feeling negative effects from weed, then combining weed with Kanna might exaggerate these effects. There’s also the chance that it might reduce those negative effects. It’s difficult to tell because people respond very differently to psychoactive substances and it can also depend a lot on the set and setting.

Overall, these are two natural substances – both with very low toxicity.

One important thing to note is that Kanna may increase the amount of serotonin in your brain. For this reason, it is important that anybody using selective serotonin reuptake inhibitors (SSRIs) does not take Kanna.

Do not use Kanna if you are on antidepressants like SSRIs, or if you are taking any prescription medications.

Do not exceed the recommended serving size for Kanna extracts – and especially for high potency extracts.

What About Kanna with CBD?

CBD, or cannabidiol, is a non-psychoactive component of marijuana with a number of health benefits.

CBD is often used to reduce feelings of stress, improve mood, and to reduce pain. Unlike weed, CBD allows you to function normally – it doesn’t get you high!

CBD with Kanna seems to be a great combination as the effects of each supplement complement each other. This is recommended for those who are not looking for a Kanna high but are rather looking to boost the positive, life-enhancing effects of either CBD or Kanna.

Unfortunately, it is difficult to find products that sell both Kanna and CBD combined, so you’ll most likely need to purchase the two separately and combine them yourself.

It’s best to start by using a low serving size for each and seeing how you respond, to find the ideal amount for your body type.

Not intended to treat, diagnose, or cure any disease or ailment. Please read and fully understand potential adverse effects before using this product. These statements have not been reviewed by the FDA and are not written by a medical professional. Please consult your doctor before using any supplements, especially if you have any medical conditions.

B.Sc. in Molecular Biology and Biochemistry Researched & written by Tristan and verified by the Liftmode.com Research Team

This entry was posted in Products, Kanna on March 8, 2019.← Previous Post